Learn About The True State of Our Economy - Without the Sugarcoating

Put All the Pieces of the Economic Puzzle Together with Economy & Markets' New FREE EBook!

Use our exclusive eBook to learn:

And more! From gold, to real estate, to the dollar, this eBook contains everything you need to know in order to survive and prosper in today's turbulent economic climate. 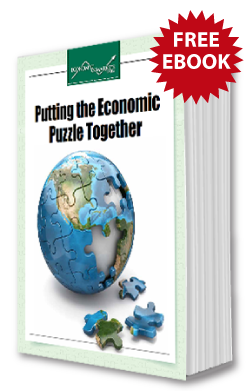 Important note: By submitting my e-mail, I give permission to receive newsletters, updates and offers from Economy & Markets. We do not sell your information and you can unsubscribe at any time.
FAQ | Privacy Policy

"I follow Economy and Markets and the Boom and Bust newsletter and I have to say I trust you all. I feel Dent Research is the only company that knows what’s happening in the world. I just wish I had more money to invest in more of the recommendations that I’m given."

"No one looks at what demographics can predict, but I love how you do. You are our go-to when it comes to planning our future and financing. We love it"

In 1989, Harry Dent wrote the book Our Power to Predict. In it, he revealed how an investor could use demographic trends to accurately predict the direction of the economy and markets, sometimes decades in advance.

Since then, Harry and his business partner Rodney Johnson have been using this New Science of financial market research to accurately identify booms and busts well ahead of the mainstream. They gained national attention for their work in warning investors of the 2008 credit crisis and subsequent economic collapse and market collapse, many months before it happened. But this was not the first time they were “on the money” with their big picture forecasts.

For example, in 1989 Harry accurately forecast the Japanese economic collapse and the multi-decade depression in Japan that would follow. He also called a Dow Jones of 10,000 by the early 2000’s at a time when most economists, politicians, businessmen, analysts and investors were expecting the exact opposite. The Dow Jones broke the 10,000 barrier for the first time on April 5, 1999.

In other words, Harry has accurately predicted most of the major economic and stock market events that, had you know what was coming, could have made you substantially richer over the past 20 years.

How Does He Do It?

While most economists focus on short-term trends… policy changes… technical indicators… elections – things that are volatile, unstable and can change from day-to-day – Harry focus on long-term trends. Demographic trends. Business cycles. Market cycles. Economic Cycles. Human behavior patterns. Purchasing Power. Things that have demonstrated themselves over hundreds (even thousands) of years to be consistent, predictable and measurable.

He studies the past to predict the future… an approach that enables him to forecast years into the future with an incredible degree of accuracy. Then he makes minor tweaks and adjustments in response to short-term events that occur along the way.

And that’s what he and Rodney bring to you in Economy & Markets so you’ll know what’s coming next… where the immediate opportunities are… and where to park your money for the longer term.

If you want to be ahead of the markets on every boom and bust… access the tools you can use to prepare yourself to stay ahead of the curve– sign up today!